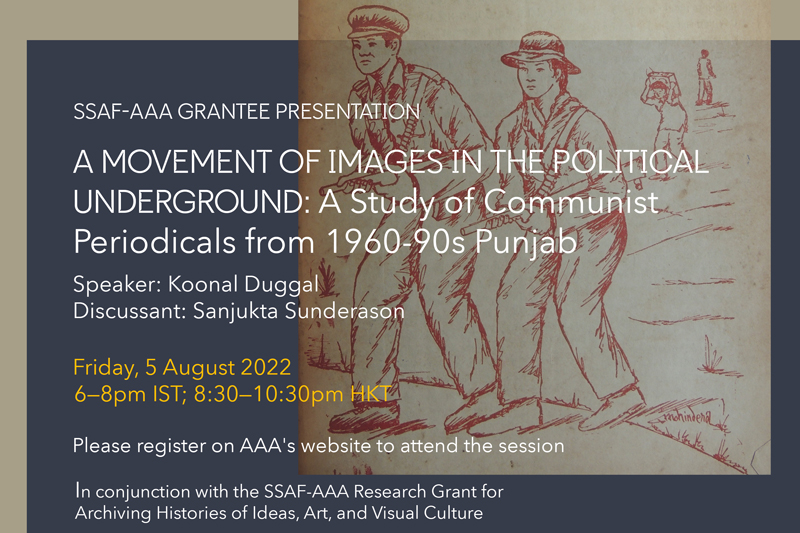 2022 | A Movement of Images in the Political Underground: A Study of Communist Periodicals from 1960–90s Punjab

A Movement of Images in the Political Underground: A Study of Communist Periodicals from 1960–90s Punjab 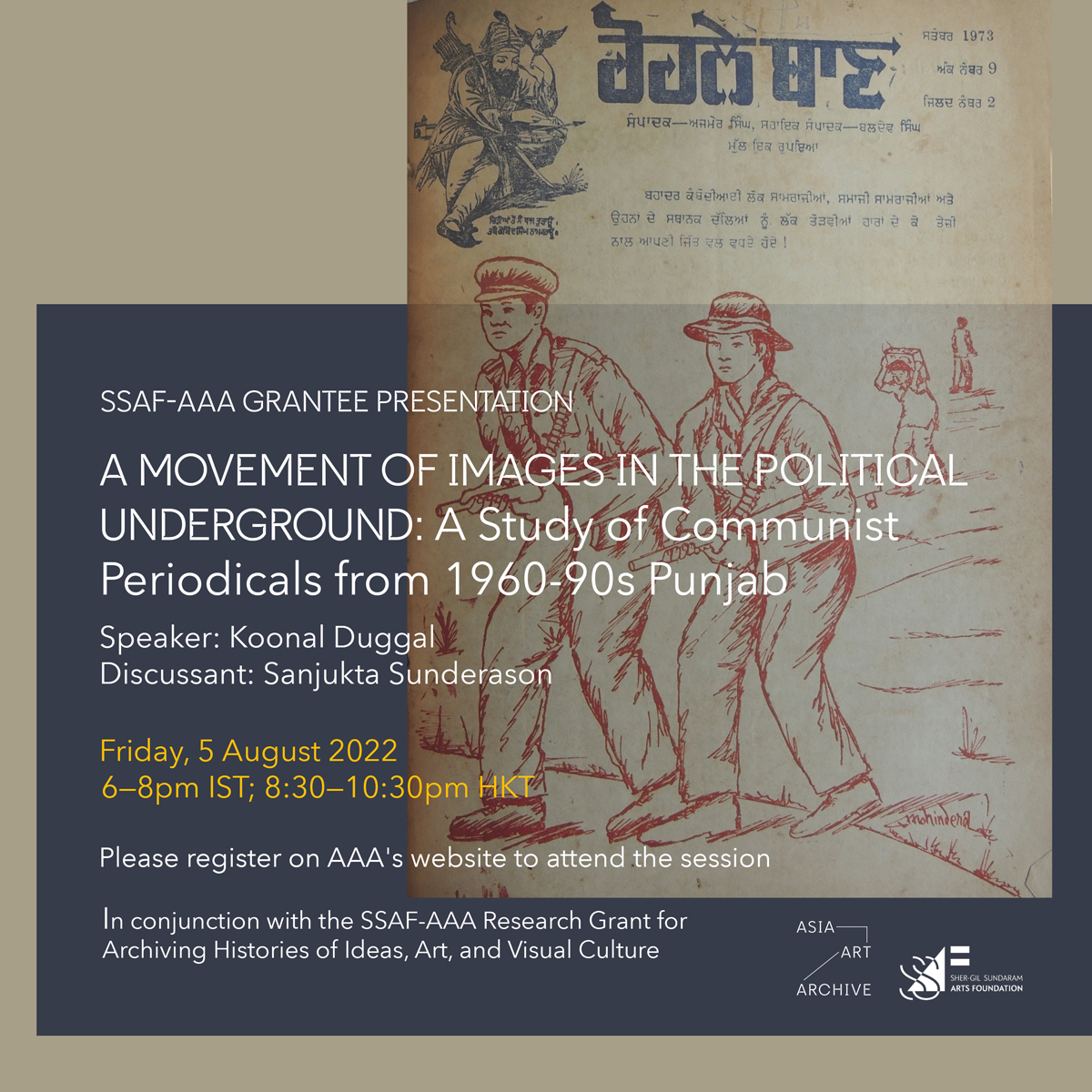 Sher-Gil Sundaram Arts Foundation (SSAF) and Asia Art Archive in India (AAA) are pleased to organise a public presentation by Koonal Duggal, the first recipient of the SSAF-AAA Research Grant for Histories of Ideas, Art Writing, and Visual Culture in 2018.

The SSAF–AAA Research Grant, offered annually since 2018, aims to encourage the use of innovative methodologies for purposes of identifying, documenting, researching, and annotating print visual materials that have hitherto been inaccessible in the public domain and are often fugitive, for reasons often political in nature.

For this public presentation, Duggal proposes to critically examine the imbrication of politics and aesthetics by considering the historical movement in/of images and ideas in relation to their re-configuration in Communist periodicals, particularly from the Naxalite movement in the Indian state of Punjab. The Naxalite movement started in West Bengal in 1967, and soon spread to other states within India. The period from the late 1960s to the mid-1990s is also marked by the Emergency, declared by then Prime Minister Indira Gandhi, followed by the emergence of the Khalistani movement demanding a separate Sikh nation.

Duggal looks at literary and political (little) magazines—underground or prohibited party literature inspired from Maoist ideology, cheaply printed and circulated in various towns and cities of Punjab. One of the primary objectives of this presentation is to understand the processes that undergirded the generation of these images in such periodicals, and to theorise these images as agents in the political sphere. It analyses how the ideological and aesthetic affiliations of Communist movements play out in print, focusing on visuals (including magazine covers, photographs, illustrations, caricatures, reproductions of artwork, etc.) from different regions and transcultural localities. It also explores, alongside a larger critique of capitalism and geopolitics, how the Naxalites responded to state oppression and emerging religious militancy in the context of Punjab during this period.

Art historian and educator Sanjukta Sunderason will be the discussant.

Koonal Duggal is Research Fellow in the Department of Social Anthropology at the University of Edinburgh. He is currently working on a research project titled “Gurus, Anti-gurus and Media in North India,” supported by the Leverhulme Research Grant. He completed his MA in Art History and Aesthetics from MS University Baroda, and has a PhD in Cultural Studies from the English and Foreign Languages University, Hyderabad. Prior to joining the University of Edinburgh, he taught for three years in the Department of Art History and Art Appreciation at Jamia Millia Islamia, New Delhi. His research interests revolve around the politics of caste, religion, media studies, and popular visual culture.

Sanjukta Sunderason is Senior Lecturer (UD1) in History of Art in the Department of Arts and Culture at the University of Amsterdam. She is a historian of twentieth-century aesthetics, researching the interfaces of visual art, (left-wing) political thought, and the historical transition during twentieth-century decolonisation in South Asia and across transnational formations in the Global South. She is the author of Partisan Aesthetics: Modern Art and India’s Long Decolonization (Stanford University Press, 2020) and co-editor (with Lotte Hoek, University of Edinburgh) of Forms of the Left in Postcolonial South Asia: Aesthetics, Networks, and Connected Histories (Bloomsbury, 2021). Her writings have appeared across multiple peer-reviewed journals including Third Text, British Art Studies, South Asian Studies, and more. She is currently working on a second monograph on transnational conceptualisations of art and liberation during twentieth-century decolonisation, thinking from the locational scales of South Asia.