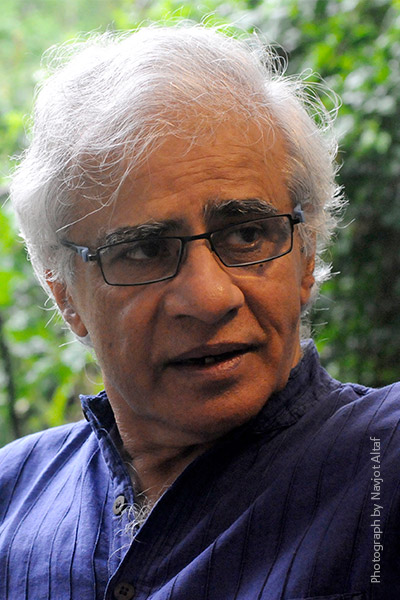 Vivan Sundaram has had solo shows in many cities in India and abroad. He has exhibited in the Biennales of Havana, Johannesburg, Kwangju, Taipei, Sharjah, Shanghai, Sydney, Seville, Berlin, and in the Asia-Pacific Triennial, Brisbane. A 50-year retrospective exhibition, ‘Step inside and you are no longer a stranger’, invited by the Kiran Nadar Museum of Art, showed in New Delhi from February to July 2018. A solo survey exhibition titled ‘Disjunctures’, invited by Okwui Enwezor and curated by Deepak Ananth, was held at the Haus der Kunst, Munich, from June to October 2018.

Vivan Sundaram has organized artists’ workshops and seminars at the Kasauli Art Centre from 1976 to 1991; contributed variously to the Journal of Arts & Ideas (1981–99); and curated exhibitions for the Safdar Hashmi Memorial Trust (SAHMAT). He is a founding member of all these organizations. He is the editor of a two-volume book, Amrita Sher-Gil: a self-portrait in letters & writings (2010).

Navina Sundaram, born 1945, grew up and studied in New Delhi.  A documentary filmmaker and television journalist, she worked for North German Radio and Television in Hamburg as editor-cum-reporter, roving correspondent, foreign correspondent and anchorwoman from 1970 till her retirement from active television life in 2005. Her films dealt with political, socio-political, economic and cultural issues in Europe, Africa, Southeast Asia and South Asia. She filmed twice at the artists’ camps held at Kasauli Art Centre. In 1983, she documented the Indo-German artists’ exchange organized at the Kasauli Art Centre by Vivan Sundaram as part of his artist-led, international residency initiative; and in 1989, she filmed a theatre workshop and seminar organized by Anuradha Kapur.

After her retirement, Navina Sundaram turned her attention to the Sher-Gil estate. In 2006 she made a film on Amrita Sher-Gil for the comprehensive exhibition shown in the Haus der Kunst , Munich and at Tate Modern, London.