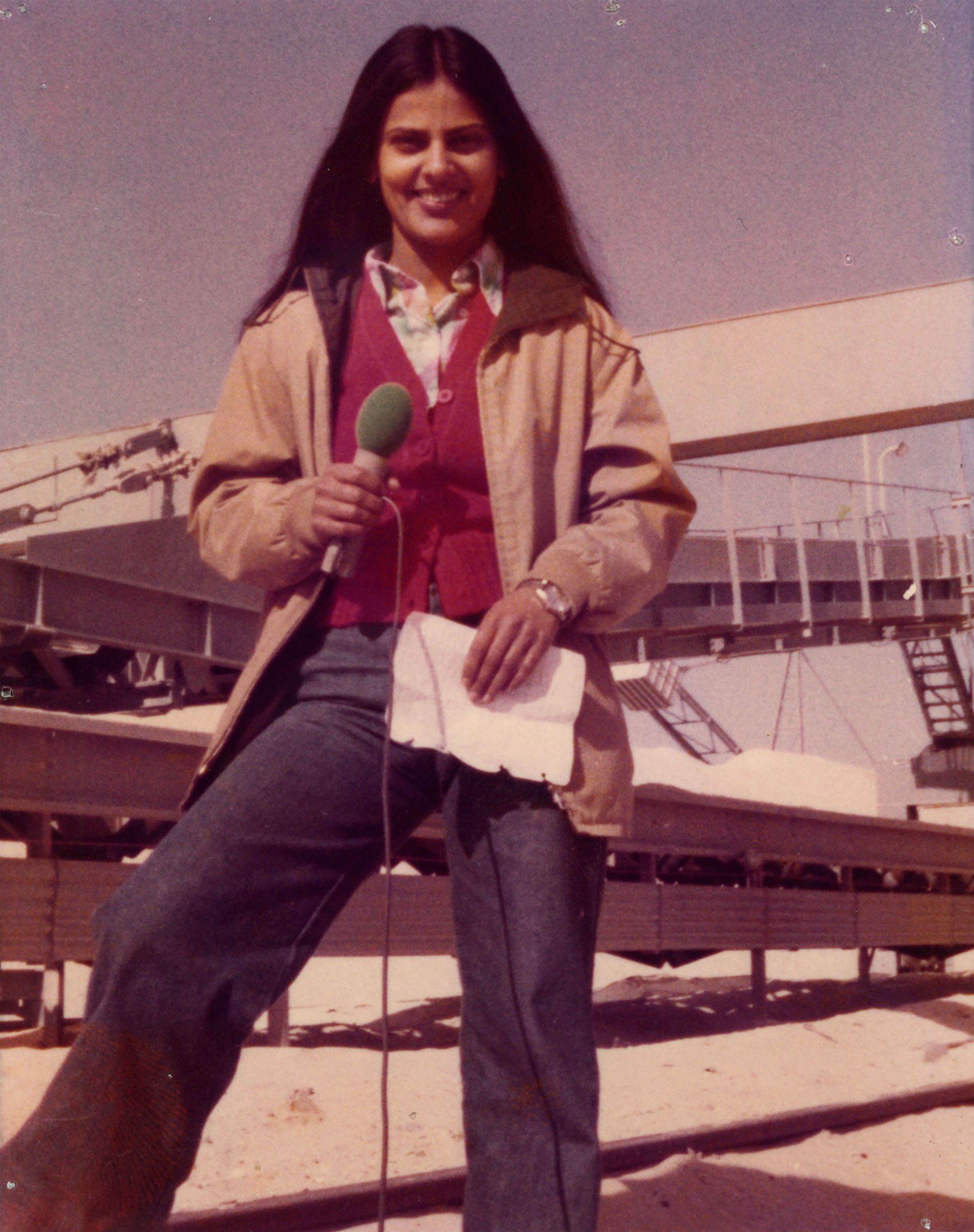 Navina Sundaram was a unique figure on German television, perhaps even European television, when, in 1970 she embarked on her career as a critical observer-participant of world affairs. Almost unbeknown to herself and her broadcasting station (NDR), she as a woman of colour in a sari – or in slacks and a slanted red beret – cut across to the emerging postcolonial discourse, its politics, its vocabulary and, above all, its passionate partisanship. She was then 25 years old.

Her documentary films, so well edited, so astutely narrativised, showed her grasp of the social and aesthetic form of public communication. She travelled across the world, dug into archives, reported and filmed on the go and on the editing table. These were often explosive moments, but she also dealt with the structural problems of decolonization and with the lost utopias of new nation-states in South Asia, Southeast Asia, Africa. Like the declaration of Emergency in India and the demolition of the Babri Masjid followed by murderous riots; the assassination of political heroes: Amilcar Cabral, Mujibur Rahman; the desperation of asylum seekers and the migration question. Sometimes she took on the political hubris of western nations and delivered her ‘verdict’ in an even tone.

Speaking of tone, one of the remarkable aspects of her broadcasting career was her resonant voice: her inflected delivery of global news from the anchor’s desk, and her voice(over) that gave the narration its pace, its mix of

engagement and objectivity. As for example her long documentary based on collated archival footage of Subhash Chandra Bose’s insurrectionary foray into the Second World War – and its tragic outcome. Relating this doomed history in a voice that had such cadence: this was Navina’s authorial self in a unique speech mode.

Navina is often described as fascinating: her beautiful appearance, her cosmopolitan ease, her boldness and wit, her friendliness and dazzling smile. Her sense of herself had a fictive aspect from her adolescence – the niece of Amrita Sher-Gil (her mother Indira, Amrita’s sister) with a conspicuous resemblance to this adored figure whose portraits hung on the walls of her home and in front of which Navina often posed, matching looks and stance as a provocation, asking for a relook at the fancied and real personas of her aunt and herself. Throughout Navina’s life there was this light-handed play with the doppelganger myth – except that she was too intelligent to push it too far.

The desire in Navina to identify with Amrita’s ‘free life’ in the 1930s transfigured into her own desire to live life as a world citizen in the mode of the 1960s. Amrita had been determined to ‘return’ to India, Navina decided to ‘go away’ while also coming back regularly to her family and her home country. She even sustained an engagement with the idea of the nation as such. This was inherited from her father – the country’s second chief election commissioner, responsible for maintaining the democratic promise in Nehru’s India. This provided Navina a starting point as a professional journalist. 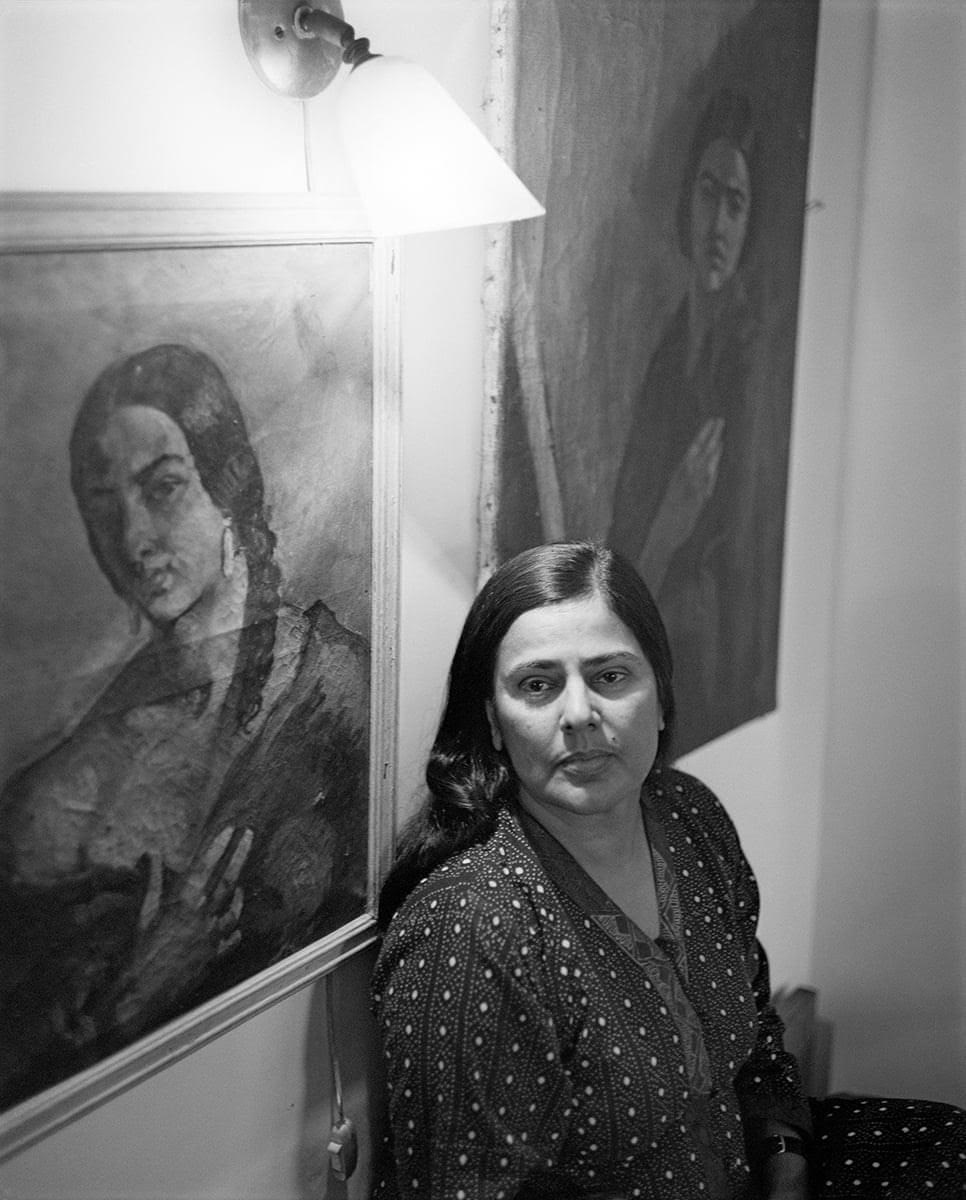 Her later withdrawal from public life was induced by a serious lung condition exacerbated by excessive smoking. A malaise of the 60s generation, this had a fictional dimension: to push the limits and face the vicissitudes of life no matter that it led to illness. As her health got worse, Navina’s yearly visits to India stopped. She retired to her beautiful home in Hamburg and lived a private life supported by close friends and her husband, Gebhardt Dietsch, curator of European classical music. 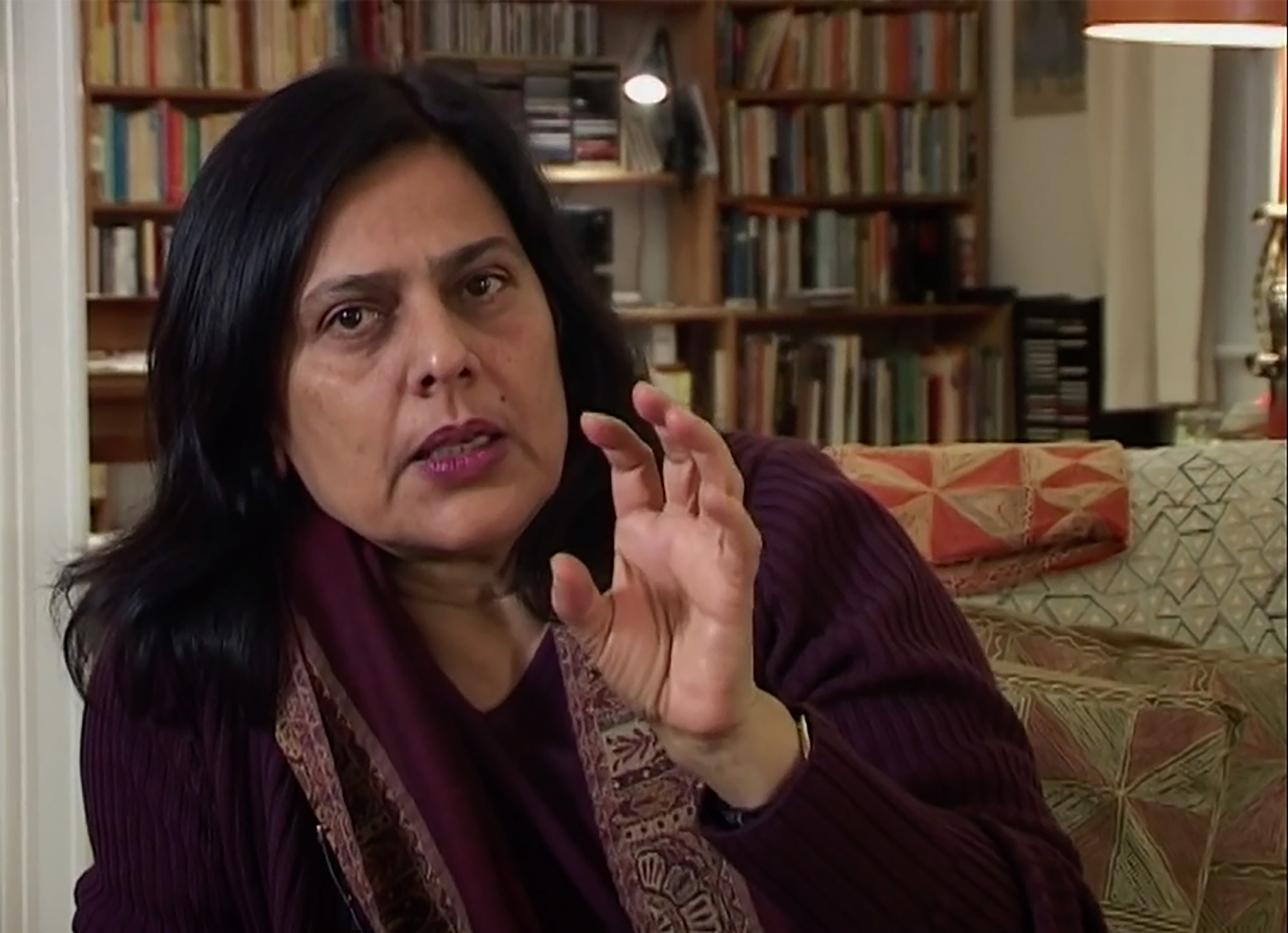 Here, in her Hamburg home, hung Amrita’s Portrait as Tahitian and Portrait in Green. Stretched out below on her lounging sofa, Navina became an incarnation (with oxygen prongs in the nose), such as one seeks, sometimes obsessively, in pictures of ageing stars. Her life had something of star-like melodrama: starting her career at 18, peaking early and ‘dying’ out slowly.

What she was blessed with in the last year of her life is a unique archive of her life and work as a television journalist and documentary filmmaker, The Fifth Wall. Put together by filmmakers Merle Kröger and Mareike Bernien – two angel figures who have, with utmost care and creative brilliance, constructed a digital hyperlinked form that reconstructs Navina’s vivid life through her reportage, her films, her letters, papers, notes and miscellanea. Textually different from a biography, the Navina archive will have a wide reach and an electric effect as scholarship comes to privilege the form of an assemblage. 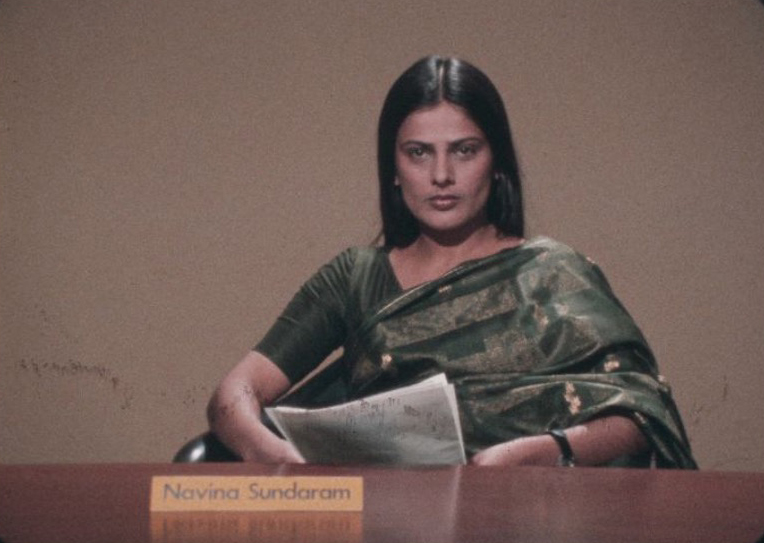 Navina Sundaram was born in 1945 in Simla, into an Indo-Hungarian family. Her mother Indira was the younger daughter of Sikh scholar and photographer Umrao Singh Sher-Gil and Hungarian opera singer Marie Antoinette. Indira studied at the famous Alfred Cortot school of music in Paris (École Normale de Musique de Paris), where she learned the piano. In 1937 she married the civil servant K.V.K. Sundaram, the first Law Secretary of independent India who went on to serve as the second Chief Election Commissioner of India, and a recipient of the Padma Vibhushan. Indira’s older sister, Amrita Sher-Gil, trained at the École des Beaux Arts in Paris and is known as one of India’s most significant early modern artists. Navina’s brother Vivan Sundaram (b. 1943) is an internationally renowned artist.

Navina grew up in the early decades of a newly independent India in a cosmopolitan milieu, seeped in a secular, modernist, internationalist vision of culture and politics. After graduating from The Lawrence School in Sanawar near Simla, she studied English literature at the University of Delhi. In 1963, at the age of eighteen, Navina hosted a series titled Asian

Miniatures for the German ARD television studio in New Delhi, at the request of well-known journalist Hans Walter Berg. She travelled to Hamburg, Germany, in 1964, when she was invited to join a two-year training programme as a television journalist at North German Broadcasting (Norddeutscher Rundfunk/NDR). She gained experience in various departments of the station before returning to India in 1966 for a brief stint in national television as editor and assistant director. From 1970 until her retirement in 2005, for three decades and a half, Navina worked for NDR in Hamburg as reporter, editor, foreign correspondent and anchor.

Navina became the face of programmes such as Weltspiegel and Extra Drei, and her news reports and documentary films established her as the first woman of colour to appear on German public television. As a journalist, she covered crucial events in the global south such as the formation of Bangladesh as well as the overthrow of the Sheikh Mujibur Rahman government there a few years later. She filmed the demolition of the Babri Masjid in Ayodhya, in northern India. She travelled to Guinea-Bissau to report on the return of Amilcar Cabral’s remains, and to Western Sahara at the time of its liberation from Spain. In all her work, Navina remained committed to ideas and movements of internationalist solidarity and decolonization. She was deeply critical of the inequality between the north and the south, as well as the growing trend of personality cults in independent democracies, as seen in the short film criticizing the Nobel Peace Prize being awarded to Henry Kissinger, reports from the ground during elections in India in the mid and late 1970s and during the communal violence of the 1990s. Navina’s work of over four decades that traversed Europe, Africa, South and Southeast Asia is pathbreaking as a passionate postcolonial voice committed to human rights, democratic values and secularism. 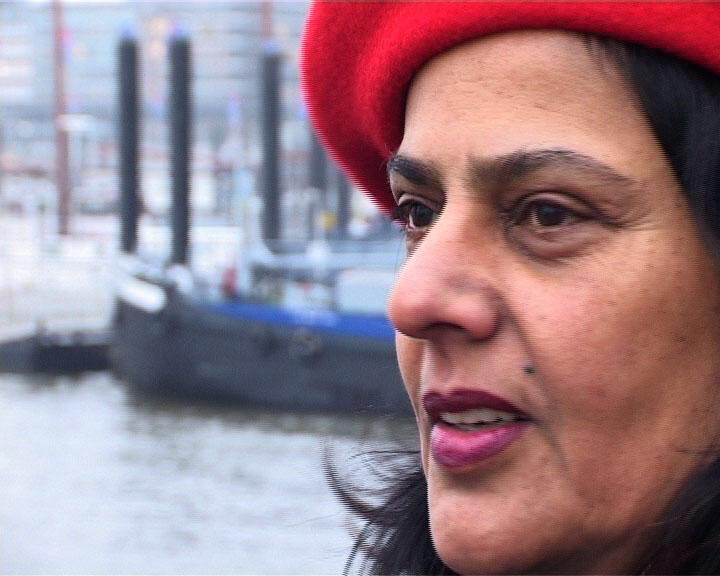 Excerpted from On ‘The Fifth Wall’: a digital archive | Navina Sundaram, 22 January 2022

Recently, Navina Sundaram’s wide-ranging body of work was collated into an interactive digital archive, The Fifth Wall, conceptualized and created by documentary filmmakers Merle Kröger and Mareike Bernien. Launched in September 2021 at Arsenal Berlin, this extensively annotated and complexly layered archive brings together films, letters, photographs, texts and other documents by Navina. The title of the project is drawn from a letter that she wrote to her parents in 1969: “Tonight, when the two astronauts land on the moon, millions of television viewers will watch them, and it’s basically exactly as far away as Vietnam, on the other side of the living room: the fifth wall.” The Fifth Wall is simultaneously a non-linear biography and an archive that “provides a unique perspective on Germany as well as one from Germany to the rest of the world. The focal point here is [Navina] Sundaram, a writer with a journalistic approach to her work: on internationalism and decolonization, on questions of class, racism, immigration, and on Indian and German politics” (https://die-fuenfte-wand.de/).

In addition to her political reportage and documentaries, Navina also made films on artists’ workshops, theatre productions, seminars and symposia held at the Kasauli Art Centre, founded by her artist-brother Vivan Sundaram at Ivy Lodge, their family home in Kasauli, Himachal Pradesh. In 1983, she made a film on an Indo-German artists’ workshop hosted by the Centre, titled Summer Guests, for NDR television. The film covers the journey of the German artists in India: to Bombay, Ajanta and Ellora; to the Faculty of Fine Arts, MS University, Baroda; and finally the workshop at Kasauli. In 1989, she made a film on a theatre workshop, production and seminar held at the Kasauli Art Centre on the representation of women in theatre, titled Behind Every Curtain a Story.

After her retirement in 2005, Navina focused on the Sher-Gil estate and the work of her maternal aunt, the artist Amrita Sher-Gil. Her film Amrita Sher-Gil: A Family Album has been shown at the Haus der Kunst, Munich and Tate Modern, London, in addition to extensive screenings in India. In 2016, Navina co-founded the Sher-Gil Sundaram Arts Foundation (SSAF) along with Vivan Sundaram. As managing trustee of the Foundation she remained committed to supporting and promoting cultural work that is rooted in creative independence, and that upholds secular principles and the freedom of expression.