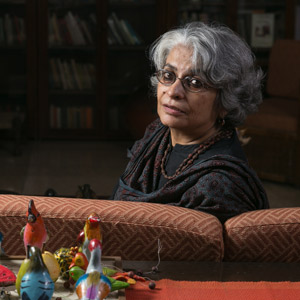 Anuradha Kapur is a theatre maker and teacher.  Her plays have travelled nationally and internationally, and she has taught in universities in India and abroad. She is the founder of Vivadi, a working group of theatre makers, visual artists, filmmakers, musicians and writers. Among her acclaimed productions are Virasat (2013),  Dr Jekyll and Mr Hyde (2012), Jeevit ya Mrit (2011), Centaurs (2006), Pata Shahar Mumbai (2004),  Antigone Project (co-directed with Ein Lall, 2003) and Sundari: An Actor Prepares (1997). Her writings on performance have been widely anthologized, and she has authored a book, Actors Pilgrims Kings and Gods: The Ramlila at Ramnagar (1993, 2004). She won the Sangeet Natak Akademi award for Direction in 2004. Anuradha Kapur completed her term as Director, National School of Drama, New Delhi, in 2013. She is presently Visiting Professor at Ambedkar University Delhi. 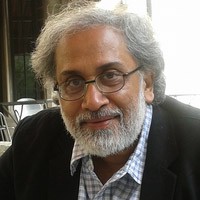 Ashish Rajadhyaksha is an independent scholar and cultural theorist. He is the author of a number of books on film, including Ritwik Ghatak: A Return to the Epic (1984), The Encyclopaedia of Indian Cinema (co-authored with Paul Willemen, 1994, 1999), Indian Cinema in the Time of Celluloid: From Bollywood to the Emergency (2009), and has edited Kumar Shahani: The Shock of Desire and other essays (2015). He has curated (with Geeta Kapur) Bombay/Mumbai 1992–2001 (Tate Modern, London, 2002), You Don’t Belong, a festival of independent video and documentary films in China (2011) and तह–सतह: A Very Deep Surface, Mani Kaul and Ranbir Singh Kaleka: Between Film and Video (Jaipur, 2017), as well as several other festival programmes. He has been a visiting faculty at the Korean National University of Art, Seoul, Lingnan University, Hong Kong and the University of Chicago. 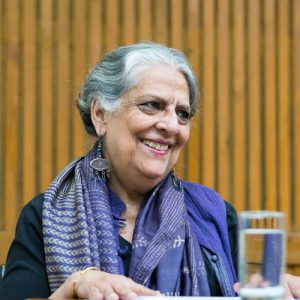 Geeta Kapur is a Delhi-based art critic and curator. Her essays on alternative modernisms, contemporary art practice and curatorial interventions in India and the global South are widely anthologized. Her books include Contemporary Indian Artists (1978); When Was Modernism: Essays on Contemporary Cultural Practice in India (2000); and Critic’s Compass: navigating practice (forthcoming).

A founder-editor of Journal of Arts & Ideas, she was on the advisory council of Third Text for two decades and is now on the advisory board of Art Margin. She is an editorial advisor and Trustee of Marg.

She has lectured in universities and museums worldwide and held visiting fellowships at the Indian Institute of Advanced Study, Shimla; Clare Hall, University of Cambridge; Nehru Memorial Museum and Library, Delhi; University of Delhi; and Jawaharlal Nehru University, New Delhi.

She was awarded the Padmashri in 2009. 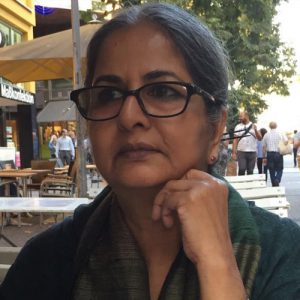 Indira (Indu) Chandrasekhar, Publisher and Managing Editor of Tulika Books, New Delhi, has been associated with Indian publishing since the early 1980s. Beginning her publishing career with Macmillan India, she worked for several years as a freelance editor, with brief stints of teaching in colleges in Bangalore and Delhi in the intervening years, before setting up Tulika Books in 1995.

Tulika Books is a small and independent publisher of academic books in the social sciences and humanities, and the authors published by Tulika include some of India’s best known intellectuals, theorists and academics. Over the years, Tulika has developed a niche list of books in the arts and cultural studies – which includes books on individual artists, thematic volumes on art projects and initiatives, as well as volumes that deal with issues and themes of contemporary art and cultural practice and their socio-political significance. Several of these are published in association with arts institutions.